Do you want to know more about lemurs and their habitats? These beautiful posters will provide you with a wealth of information.  Each poster represents a different Malagasy habitat. 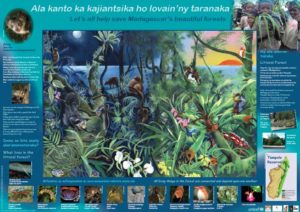 Tampolo is home to the Aye-Aye.

The aye-aye is a long-fingered lemur, a strepsirrhine primate native to Madagascar with rodent-like teeth that perpetually grow and a special thin middle finger. It is the world's largest nocturnal primate. It is characterized by its unusual method of finding food: it taps on trees to find grubs, then gnaws holes in the wood using its forward-slanting incisors to create a small hole in which it inserts its narrow middle finger to pull the grubs out. This foraging method is called percussive foraging, and takes up 5–41% of foraging time. The only other animal species known to find food in this way is the striped possum. From an ecological point of view, the aye-aye fills the niche of a woodpecker, as it is capable of penetrating wood to extract the invertebrates within. 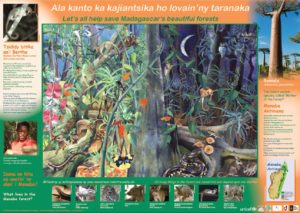 Menabe is home to the Mouse Lemur.

The mouse lemurs are nocturnal lemurs of the genus Microcebus. Like all lemurs, mouse lemurs are native to Madagascar. Mouse lemurs have a combined head, body and tail length of less than 27 centimetres, making them the smallest primates; however, their weight fluctuates in response to daylight duration. Lemurs and Mouse Lemurs were announced by the IUCN as the most endangered of all vertebrates. There were 2 known mouse lemur species in 1992; by 2016, there were 24. It was estimated that the 24 mouse lemur species evolved from a common ancestor 10 million years ago. Evolution of mouse lemurs is an example for adaptive radiation. 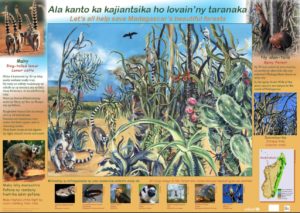 Berenty is home to the Ringtail Lemur.

The ring-tailed lemur is a large strepsirrhine primate and the most recognized lemur due to its long, black and white ringed tail. It belongs to Lemuridae, one of five lemur families, and is the only member of the Lemur genus. Like all lemurs it is endemic to the island of Madagascar. Known locally in Malagasy as maky or hira, it inhabits gallery forests to spiny scrub in the southern regions of the island. It is omnivorous and the most terrestrial of extant lemurs. The animal is diurnal, being active exclusively in daylight hours. 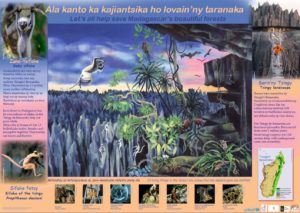 Bemaraha is home to the Sifaka.

A sifaka is a lemur of the genus Propithecus from the family Indriidae within the order Primates. The name of their family is an onomatopoeia of their characteristic "shi-fak" alarm call. Like all lemurs, they are found only on the island of Madagascar. All species of sifakas are threatened, ranging from vulnerable to critically endangered. 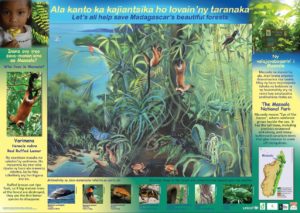 Masoala is home to the Red Ruffed Lemur

The red ruffed lemur is one of two species in the genus Varecia, the ruffed lemurs; the other is the black-and-white ruffed lemur. Like all lemurs, it is native to Madagascar. It occurs only in the rainforests of Masoala, in the northeast of the island. It is one of the largest primates of Madagascar with a body length of 53 cm, a tail length of 60 cm and a weight of 3.3–3.6 kg. Its soft, thick fur is red and black in color and sports a buff or cream colored spot at the nape, but a few are known to have a white or pink patch on the back of the limbs or digits and a ring on the base of the tail in a similar color. 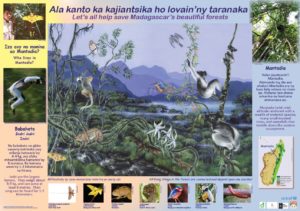 Andasibe is the home to the Indri.

The indri, also called the babakoto, is one of the largest living lemurs, with a head-and-body length of about 64–72 cm and a weight of between 6 to 9.5 kg. It has a black and white coat and maintains an upright posture when climbing or clinging. It is monogamous and lives in small family groups, moving through the canopy, and is purely herbivorous, feeding mainly on leaves but also seeds, fruits, and flowers. The groups are quite vocal, communicating with other groups by singing, roaring and other vocalisations.

Bandro (also know as the bamboo lemur or gentle lemur) 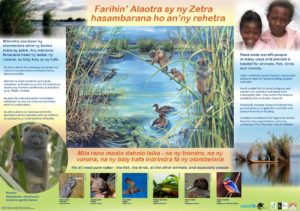 The Lac Alaotra bamboo lemur (Hapalemur alaotrensis), also known as the Lac Alaotra gentle lemur, Alaotran bamboo lemur, Alaotran gentle lemur, Alaotra reed lemur,[4] or locally as the bandro, is a bamboo lemur. It is endemic to the reed beds in and around Lac Alaotra, in northeast Madagascar. It is about 40 cm (16 in) long, with a similar length tail, and is a brownish-gray colour. It is the only bamboo lemur to live in and feed on papyrus reeds, and other reeds and grasses, and some authorities argue that it should be regarded as a subspecies of the eastern lesser bamboo lemur (Hapalemur griseus). The population of this lemur has been declining because of habitat destruction and the International Union for Conservation of Nature has rated it as being "critically endangered". 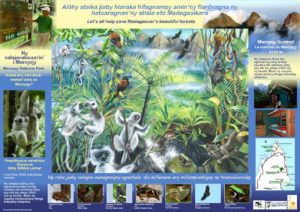 Marojejy is home to the Sifaka Lemur.

A sifaka is a lemur of the genus Propithecus from the family Indriidae within the order Primates. The name of their family is an onomatopoeia of their characteristic "shi-fak" alarm call. Like all lemurs, they are found only on the island of Madagascar. All species of sifakas are threatened, ranging from vulnerable to critically endangered.

You are welcome to use or print these beautiful posters. If you do so, we would be grateful if you would make a contribution to the important work that Money for Madagascar is doing to protect vulnerable habitats, restore precious forests, build sustainable livelihoods and educate the next generation about their unique environmental heritage.  If you require high quality PDF files of the posters, these can be obtained by contacting us at: admin@moneyformadagascar.org.